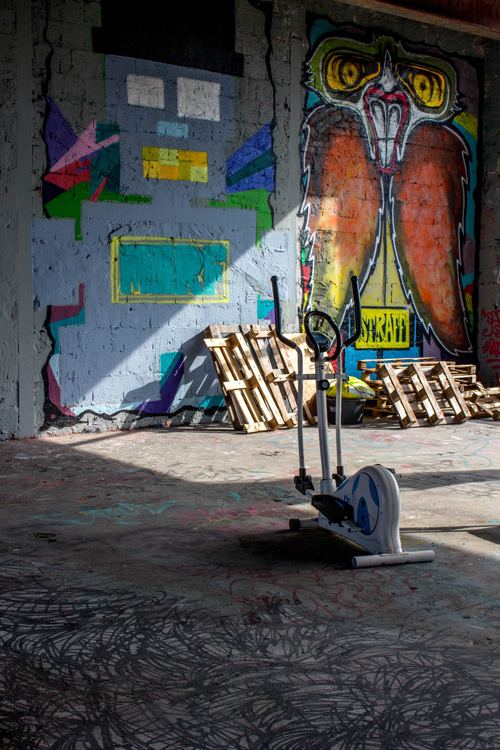 Tempelhofer Feld, the old airport that never got the chance to show its potential. Air corridors and the candy bomber of Berlin. A kite runners and surfers’ own little retreat, the occasional race track and a temporary refugees camp. Rainy day, landing strips, bikes and splashing water.

Berlin is full of alternative scenes, and alternative is now becoming hip and mainstream. What starts out as a sign of protest again society is now appreciated by said society for their own sake of entertainment. Take the little alleyway of Schwarzenberg Haus. In 2009, I took a photo while wandering the quiet area undisturbed..in fact, I only stumbled upon it because of a classic case of I got lost. I tried once to go back to the same location but couldn’t remember where it was.

Cue 2017, masses of group tourists and guided tours admire the paint-covered walls. At times, the amount of tourists fills up the entire floor space of the alley, with people squeezing into the little café that is now declared the not so secret secret tip.

While society catches up to the idea of appreciating this rugged and unrefined kind of art, the scene is moving on to battle gentrification. Is street art only worth something if it is not appreciated by the mass? How alternative can succesful art be?

Schwarzenberg Haus in the Hackesche Höfe

near Yaam, an African community at the East Side Gallery

East Side Gallery (see this post) is no secret, but always great for enjoying the many layers of history covering Germany’s capital.

One newly discovered favorite is the area near Oranienburger Straße, with galleries and really cool restaurants and tea houses lined up on Auguststraße/August Street.

To continue with the ongoing abandoned buildings trend, here is another commercialized street art community hotspot: The old US listening station on Teufelsberg (meaning Devil’s Mountain, how appropriate). This is one the highest elevations in Berlin – I don’t want to say mountains because…well it is not that elevated. Risen out of the debris of Berlin from the Second World War, this hill will literally let you step onto another piece of Berlin history.

So who is this place for? The artists? The community? Dwellers? Tourists? People who want to feel adventurous but not too adventurous? I’m following this trend too but I don’t know where this should be going…

Nonetheless, it is a fascinating place to be. Wandering the building, feeling like an explorer of sorts. Only that is has all been thoroughly explored already, and there is even a group of kids running around. Nonetheless, it is quite beautiful it its own way.